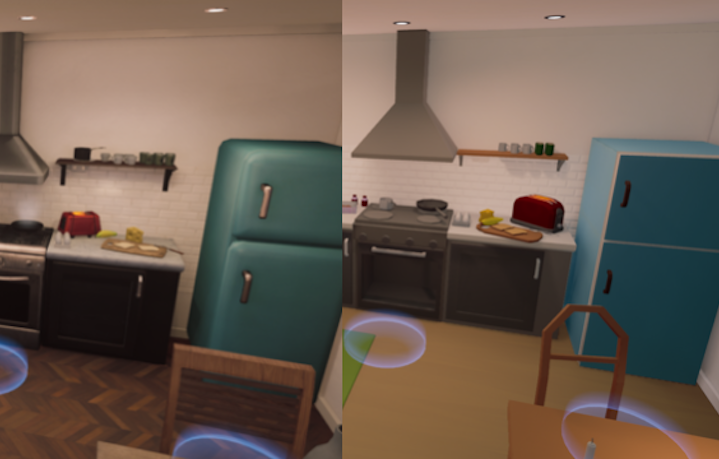 From the learnings made in Designing inclusive VR training part 1, we set out to begin testing some different approaches in building an inclusive learning experience. From the user tests with people with dyslexia and interviews with The Swedish Dyslexia Association, our main takeaway was to reduce the amount of text used in an VR experience, compared to the typical best practice. But what about other neuro diverse people? Do they also have issues with the design of VR applications?

In this second study, we wanted to get more concrete and answer two fundamental questions in regard to design and interface:

In the first test, two 3D art styles were used for the same VR kitchen environment. One was designed to be realistic looking, while the other was created in a simplified and stylized way.

In the second test we focused on comparing instruction methods and feedback mechanisms. Three types of instructions were tested: visual, text and verbal.

Each test was focused on packing a picnic basket with items found in a kitchen environment. This environment was chosen to ensure all participants began with a certain level of familiarity.

In both tests, the participants were required to memorize the order, amount and the location where items were placed in the kitchen.

THE RESULTS – NOT WHAT YOU WOULD HAVE EXPECTED

Contrary to preference and expectations, the results showed that the participants performed better in the simplified stylized environment (see Table 1), regardless of which test they started with.

To compare the instruction methods,visual methods were the most preferred and highest rated. Interestingly, this is also the method that resulted in the worst performance.

One benefit of visual instruction is that it is intuitive and has little limitations in design choices when compared with text and voice. However, visual instructions are also something that users are generally not used to. Future research coupled with extensive user experience studies will be needed to investigate how visual instructions should be optimally designed.

Text was rated the lowest preferred instruction method, but had the best performance results. It was also the method that many felt worked best for them. instructions containing numbers and bulleted list turned out to be preferable, as were instructions that were divided into smaller bits and displayed one at the time. It is important to note that relying on text as an instruction method may be too much of a challenge for people with reading disabilities.

Many participants felt there was too much information to memorize when following the verbal instruction. Many wanted to begin the task as soon as possible because they were afraid they would not remember otherwise.

Our hypothesis that individuals will not learn as efficiently from a less realistic VR environment, was not correct.

Visual instructions was the preferred method, but textual instructions had the least errors made. The majority of participants said they would want a combination of instruction, rather than just one method. A recommended solution would be to give the users an option to choose what type of instructions they want.

In addition, we noticed that a level of personalization can help facilitate a good learning experience . A few participants thought that some colors and lights were too strong, making them lose focus on the task. This could be avoided if colors and lights could be adjusted by the users themselves. We also experienced an “exhaustion” phenomenon. In Test 1, whether you started with a realistic or stylized environment, the performance was worse for the second test in VR. The same pattern was also seen with the different instruction methods in Test 2. This indicated that the participants became fatigued as the tests went on. For future use of VR in learning situations, tasks should be kept short and be repeatable.

The majority of participants felt that VR is a good tool for learning and 72% believed it to be better than traditional learning methods. This indicates that VR could be a helpful tool for people diagnosed with neuropsychiatric disabilities.

To conclude, when virtual reality is optimized with proper introduction, personalized settings, and intuitive instructions, it can become a powerful tool for anyone who wants to learn new skills.