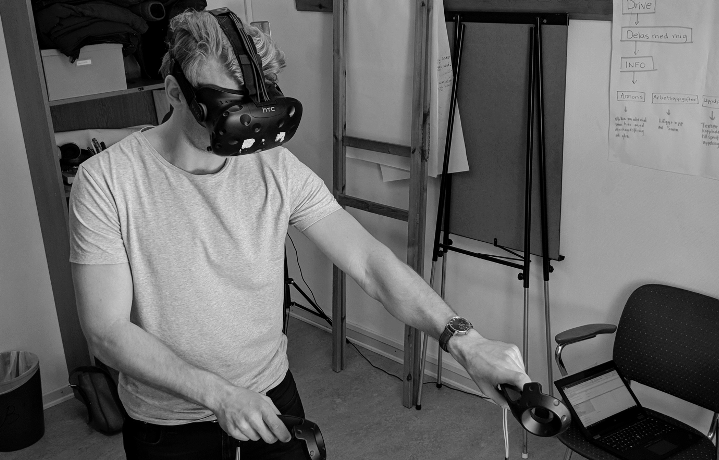 There is a vast difference in how people learn. Some prefer to read and memorize, while others learn by doing. From testing our VR training applications with hundreds of people, we realized that VR could be useful for those who have struggled to learn through traditional learning methods. Practical tasks are especially challenging to practice in real life. There are a multitude of tasks in, for example, heavy industry where employees are unable to practice and learn how to handle machines due to it being too dangerous, or because they are constantly in use.

A meeting with the Swedish Autism and Asperger Association inspired us to look into if VR could be relevant for people with neuro diverse disabilities such as ADHD and Asperger's syndrome, as well as people with dyslexia. VR provides a unique way for people to learn by doing in a controlled, customizable environment. In VR, user instructions can be customizable and distractions that exist in the real world can be removed. Having this in mind for people with disabilities such as neuro diverse disabilities or dyslexia, we learned that VR holds many advantages compared to traditional theoretical learning, at least in theory.

While a great number of user studies have been done for VR, very few are focused on people with neuro diverse disabilities.

We started out to test the relevance of VR with 15 participants with no prior experience in VR. We were supported by Stelacon, a Swedish consultancy company that specializes in user testing for people with disabilities. The participants all had one or more diagnosis, summarized below:

All the participants were introduced to the same VR hardware and the same three learning experiences. Each of the learning experiences provided a different way of receiving instruction. Each test took approximately 1h and 30 min. Feedback was continuously collected throughout the test, and each user test ended with a survey.

One participant stopped the test early due to fatigue, while the other participants successfully completed all three l training tasks. All participants concluded that VR as a concept has a huge potential to help people with neuro diverse disabilities and dyslexia the world over. However, we also learned that the design best practice among a lot of VR developers are not including this group.

Below are some key takeaways we captured from the study:

In the next blog post, we'll look at the type of instruction participants preferred in the second user study focused on people with neuro diverse disabilities.